Brews on Tues: Crawling through the Wedge

About a month ago you read a little about the Rochester YUPs’ WHERE THE #$@& AM I? Coaster Project. We’ve all been in a building at some point and thought “I wonder what this building used to be?” This is where our coaster project comes in–we research and talk to the owners of bars and restaurants housed in old spaces and create a website that can be accessed by a QR code, which we then print on bar coasters and give to the bar to spark their patrons’ interest in the space and to get people thinking about their city’s history. In May, to celebrate the addition of 4 bars and restaurants to our project we held a bar crawl through the South Wedge neighborhood of Rochester.

We started the crawl at Tap and Mallet, a bar known for its impressive, frequently changing draft list, pub food and a laid back vibe. With 30 draft lines and a cask ale, it’s not hard to find something you’ll enjoy. Built in 1899, the building has a pretty boozy history, it was originally a saloon and at one point it was home to a grocery store. The last few decades it’s gone back to its roots, housing several bars and restaurants.

Despite, or maybe because of, Rochester’s tendency towards long, cold, snowy winters, Rochesterians live for their outdoor eating areas. And Tap and Mallet’s doesn’t disappoint with tables set up on the sidewalk in the summer and a patio in the back complete with overhanging trees, brick walls, and a mural.

Our second stop, just down the street, is tucked into the basement of the Historic German House. The German House was built in 1908 by St. Boniface Church, a Catholic church just across the street, to serve as their parish hall. In 1924 they sold it to the United German-American Societies of Rochester, hence the name. The German House is one of those places that’s been around for so long and housed so many things, everyone has been there at some point. Fun fact: Rohrbach Brewing Company, which was mentioned in Rochester’s last Brews on Tues post got its start in the German House. And since 2014, ButaPub has been a part of that almost 100 year history. 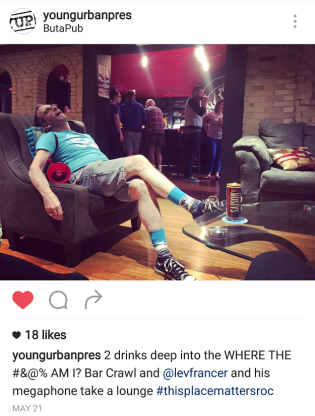 On our bar crawl, we were lucky enough to have the owner give us a backstage look at the building, literally. Most of the German House is taken up by the concert hall where the owners are working on uncovering and restoring some of the unique features of the building, including the original tin ceiling. After the tour it was back down to ButaPub’s swanky bar for drinks and a little relaxation before moving on.

After enjoying ButaPub’s lounge, it was just a quick stroll around the corner to Harry G’s, the youngest bar so far to be a part of our WHERE THE #&@% AM I? Project. Most Rochestarians know Harry G’s as a deli, which opened in 2012. When the space next door to them became available the owners decided to expand and opened a bar earlier this year. Harry G’s has some beautiful original brick walls, an emphasis on New York State beers and wine, and an entire deli just next door. If that doesn’t say great neighborhood bar, I don’t know what does.

Our final bar on the crawl, a few doors down from Harry G’s, was Lux Lounge. Lux is THE bar of the neighborhood, it’s a self-proclaimed dive bar that is so Lux it’s honestly hard to explain. In the summers the backyard is full of people and dogs alike and on Wednesdays you might be lucky enough to find your favorite cult classic playing. Your first visit to Lux isn’t complete until you’ve had their cheeseburger shot: a shot each of tequila, tomato juice, and pickle juice. On any night you might walk into craft night, free PB&J night or a DIY bloody mary bar. Lux has been a longtime focal point for us YUPs (serving as the HQ for our first two Bikes, Beer, & Buildings scavenger hunts) so it was only natural that we make them the grand finale to our WHERE THE #&@% AM I? Bar crawl. In the 1980s the building was home to the Snake Sisters Cafe, a lesbian bar, where Lux owner Karrie first happened upon the place and said that someday the space would be hers. 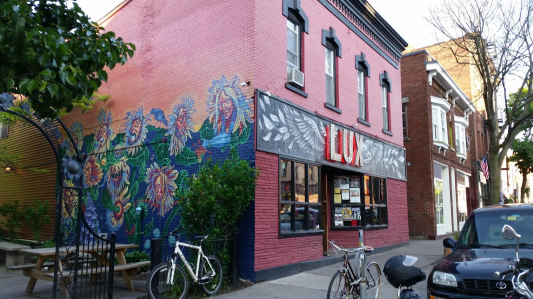 Although these four bars and restaurants serve different drinks, different food, and have very different atmospheres, the one thing they have in common is their love of their community. The South Wedge neighborhood they all call home is known for being slightly off kilter, a little gritty but dedicated to its inhabitants. And these four establishments are no different. Each of these places want their patrons to be comfortable in their space, to keep coming back until it’s the regular hangout. Whether they know it or not, using these old spaces jumpstarts that comfortable feeling. Walking in, you know a thousand feet have crossed that threshold before you and a thousand more will cross it after you. You’re not surprised to find a healthy selection of local beers on their draft list because these places all resonate with the love they have for their city and neighborhood. Those feelings can’t be mass produced, they can’t be bought. They only come from time and a lot of love. And the YUPs will always raise a glass to that.