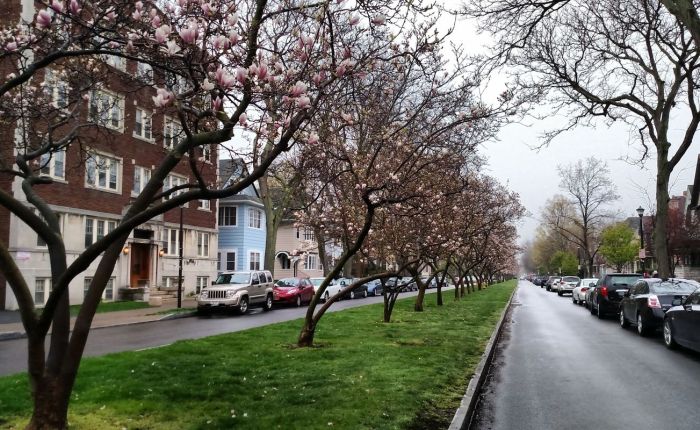 Many Rochesterians and visitors spend a great deal of their leisure time and dollars in our city’s historic districts.The diversity of retail, quality housing, and picturesque streetscapes draw people in and, whether they know it or not, they are appreciating and supporting the preservation of these areas. You might even call them closet preservationists (see Caitlin Meives’ TEDx Flour City talk below for more about this). The historic buildings, parks, and public spaces that make up the fabric of our city are critical to a healthy neighborhood. For me though, it’s the pedestrian-centric design and the human scale of our historic districts–created before America became infatuated with the automobile–that are the underpinning for the success of our historic districts.

I live in one of Rochester’s best preserved and most popular neighborhoods, just south of the East Avenue National Register Historic District (also a locally designated City Preservation District). Park Avenue runs along the southern edge of the East Ave. district and is the commercial and social spine of the neighborhood. Radiating from this street of bars and restaurants overflowing onto the sidewalks with dogs and people is a tightly woven grid of small apartment buildings and turn of the century homes. The sidewalks, lined with mature trees and welcoming front porches, boast a diverse, ever-changing cast of characters–from overindulgent college students, to retirees and their noble dogs, to visitors from the suburbs and an ever-growing armada of strollers. 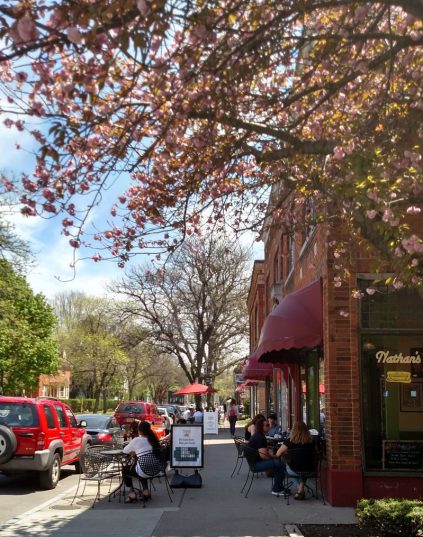 Although we’re just a few blocks south of Park Ave., those of us in the heart of the Park Ave. neighborhood (a large swathe of thousands of properties) are left out of the district and therefore left out of the NYS Homeowners Tax Credit program. Our section of the neighborhood has been officially eligible for listing since the 1980s but no one has ever taken the initiative to pursue a district. New census data has revealed that Park Ave. (admittedly one of the wealthier neighborhoods in the city) is now in a census tract that qualifies for the NYS tax credit programs. That was the motivation that we, as homeowners who are spending an inordinate amount of income on old house repairs, needed to begin the daunting task of getting a nearly 2000 property district listed.

With my partner and YUP co-founder, Caitlin, leading the charge, we’ve begun the long process of getting our neighborhood listed as a historic district. We are starting by getting estimates from consultants and reaching out to homeowners (both in the existing East Ave district and the potential Park Ave district) to inform them about tax credits and the National Register listing process. Rochester has so many amazing neighborhoods, and I believe the impetus is on us, the citizens,to be good stewards of the amazing neighborhoods and spaces our city has to offer for future generations.

We love our historic districts for so many reasons, from their unrivaled architecture to their well-established communities to their human-scale intimacy. But there’s another thing we here at the Rust Belt Coalition love about our historic neighborhoods: the blue-collar tradition of the local tavern. And we feel that here in the Rust Belt more than any other region, the unpretentiousness, sense of community, and ubiquity of the neighborhood bars allow them to be meeting places welcoming to everyone.

Pittsburgh, as an old mill town, has no shortage of these taverns where you’d feel just as comfortable ordering a West Coast fancy beer as an Imp ‘n’ Ahrn. We’re going to look at a couple bars in Historic Deutschtown in Pittsburgh’s North Side that are upholding this great tradition.

The Park House is a Pittsburgh institution, and for good reason. Housed in an 1890s-era storefront in the main business district of Deutschtown, the bar has been continuously operating since the end of Prohibition. Though its narrow footprint makes for tough navigating when it’s packed, the small size of the bar lends to its local feel. And the place does get packed – One of the most well-known Park House tradition is the free bluegrass Wednesday with the Shelf Life String Band, which fills the bar each week.

Plus, Park House always has free popcorn and peanuts, which is awesome.

Max’s Allegheny Tavern puts the “Deutsch” in Deutschtown (and I can’t believe I just wrote that). Its German menu is well known in the city, and at least I can attest that their potato pancake reuben is out of this world. Max’s, with significantly more space than the Park House, has a more relaxed, sit-down vibe, and it’s definitely more of a bar/restaurant feel. But that doesn’t make it any less cozy or intimate…wooden booths, gorgeous stained glass light fixtures, and a working player piano give the tavern a welcoming and historic feel. Order their German beer sampler flight and you can’t help but think of the German immigrants who built the North Side and gave it that distinct feel you can’t find anywhere else in the city.

Allegheny City Brewing is one of the newest businesses putting up shop in Deutschtown. A brand-new brewery from a few Pittsburghers who spent some time in Colorado, ACB looks to have the potential (from the couple times I’ve been in their shop for tastings) to be a new anchor institution in the North Side. Their beer list is incredibly extensive and they have a real connection with the neighborhood and its history. They’re looking to open within a month or so, so keep an eye out!

The Rust Belt Coalition of Young Preservationists loves beer. And we (obviously) love historic districts. So you can imagine how excited we get when a historic district has a robust bar scene like Deutschtown in Pittsburgh. Be sure to hit us up next time you’re in town – we’ll show you around the neighborhood! 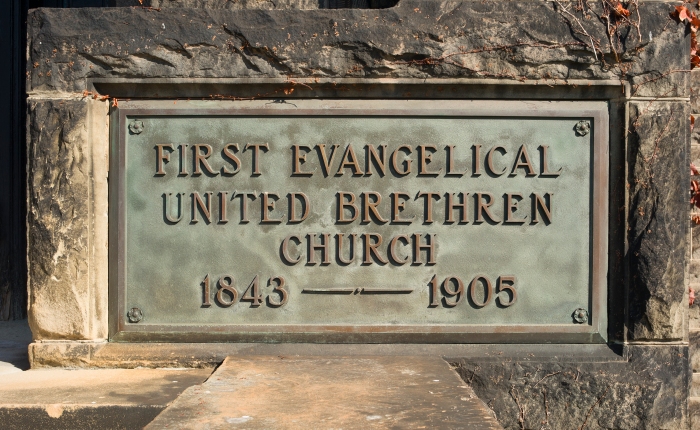 Though we don’t have the same urgency of potential threats to our local historic districts and landmarks as seen recently in Michigan and Wisconsin, Pittsburgh residents have to navigate through some legal hurdles to push for preservation in our neighborhoods. Whether it’s the City Code, zoning restrictions, or other obstructions, sometimes YPA has a great plan to save a site, only to be stymied by legal issues.

An interesting example of such legal issues is the Albright United Methodist Church. Some of you came by to snap a photo the Sunday of the RBCoYP Pittsburgh Summit…ugh, Ok, let me figure out how to embed Instagram photos…Ok, here it is:

Today's first @rustbeltyp stop was at the threatened Albright United Methodist Church. Wouldn't it be great to find a new use for this building instead of demolition for another chain coffee store? #rustbeltlove #rustbelttakeover #savingplaces #thisplacematters #albrightunitedmethodistchurch #unitedmethodist #church #pgh #pittsburgh

The Albright Church and its congregation has a rich history that is inextricably tied with Pittsburgh’s own  – a great summary can be found here. The congregation formed in 1843 and is one of the oldest continuously worshiping religious groups in the city, having moved from the heart of Downtown during the early 20th century to the then-developing East End as the city expanded. The congregation worshiped in the building at Centre and South Graham for over one hundred years.

Sadly, a mold issue in 2013 forced the Albright Community to stop using the structure, and a developer has struck a deal with the Western Pennsylvania United Methodist Conference to demolish the historic church and construct a suburban-style, single-story commercial building with parking lot and drive-through in its place. When we heard about this story and plan, YPA decided to work with the nonprofit Friends of Albright to save the building from threat of immediate demolition by supporting a city historic designation.

The only wrench in the works is – and I’m gonna get a little into potential “boring” territory here – City of Pittsburgh Code, Section 1101.03, which says that religious structures must be nominated for historic designation by their owners. Friends of Albright has used the fact that the Western PA Methodist Conference has been on record that the structure, as it is no longer used for religious worship, isn’t a religious structure, and the statute doesn’t apply. Regardless, after the city Historic Review Commission recommended it for Historic Designation, the Methodist Conference decided to sue the city, Friends of Albright, and a few local residents.

Nevertheless, the push for historic designation moved ahead, and yesterday (May 3) afternoon, the City Planning Commission voted unanimously to back the designation. The next step, then, is City Council, and if they have no objections, Albright will be a city Historic Structure (yay!). Aaaaaaand then the lawsuit will likely commence (boo!).

So we at YPA don’t know what will come of the suit or the city code that impedes citizens from nominating religious structures to historic designation. But we plan to back the Congregation and Friends of Albright through the mess and prevent this gorgeous and historic structure from being replaced with drive-through, suburban-style “development.” I hope you all are interested in following the push for historic designation! We’ll be posting about it on the RBCoYP Facebook page, and follow Friends of Albright on their website. 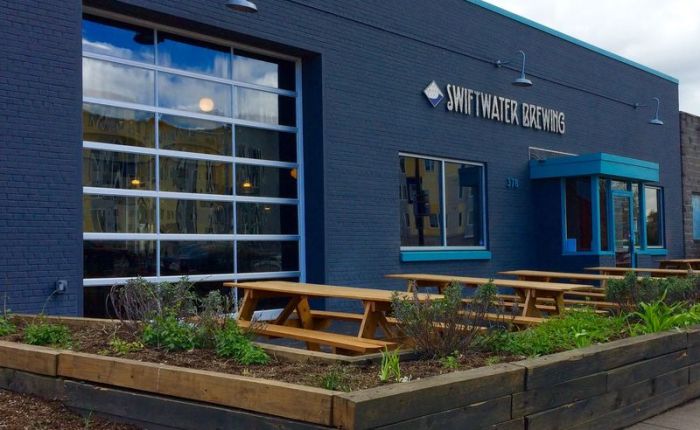 In a new office park in the Rochester suburb of Victor, NY, sits one of the world’s largest beverage companies, in fact, the largest wine producer in the world. Historically, the Rochester drink scene has been dominated by its famed ice wines and prize winning rieslings from the rolling hills of the Finger Lakes Region. But like the Rust Belt young preservationists who have come Tuesdays prior and those who will come Tuesdays next, we Rochesterians have decided that we want our booze local, urban, and found in old buildings.

In 2014 the Young Urban Preservationists of The Landmark Society of Western New York (YUPs, for short) unveiled our WHERE THE #&@% AM I?™ historic pub/bar coaster project. The Rohrbach Brewing Company Beer Hall and Black Button Distilling were in the coaster project’s inaugural class. These two establishments are located on Railroad St. in a factory building built for the Bantleon Brothers’ millwork door company in 1906. Since the door company, this building has housed a telephone warehouse, an auto parts company, and a flea market.

Jason Barret named his distillery Black Button to honor his family’s history of manufacturing buttons that “have closed suits worn by presidents, popes, kings, and businessmen the world over.” Colorblind, Jason grew up thinking every button was black. Black Button was Rochester’s first urban distillery since prohibition, and Rohrbach’s is deemed Rochester’s original craft brewery. 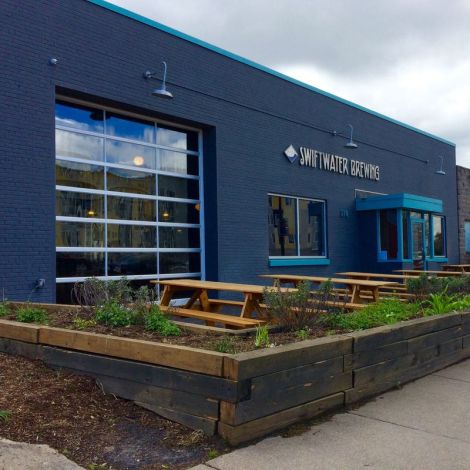 As the mid 20th century fades into the past, we YUPs can now embrace its architectural fruits. Swiftwater and ROC Brewing Company are modern in their decor and flavor. Located in a former car repair garage across from the Genesee River, Swiftwater stays true to theme with kayaks hanging on the walls. It’s a partcularly gratifying place to drink a beer after a subzero heart-bombing event.

At ROC Brewing, whether playing shuffleboard or Wednesday night trivia, you can enjoy unique brews like the jalapeno-tinted saison “Sassypants” or my favorite, the citrusy “WHOOPASS” imperial/double IPA. And you can usually catch a pretty fantastic sunset over the downtown skyline, with our lovely Inner Loop project in the foreground (a sunken highway/moat around downtown that’s currently being filled in to re-create a normal urban street…yay for undoing urban renewal!). 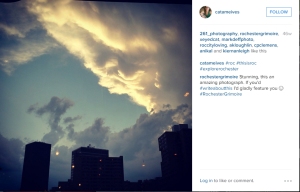 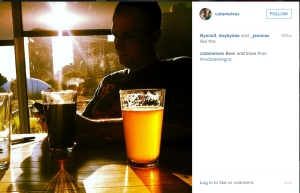 We are looking forward to the development of Split Batch Brewing, a combination coffee shop, craft brewery in one of downtown Rochester’s newest repurposed buildings, The Hive @ 155. Split Batch won the inaugural Retailent Rochester competition last year, offering free rent for a year and start-up assistance. Isn’t it the best when our two favorite activities of historic preservation and drinking local brews can go hand-in-hand? 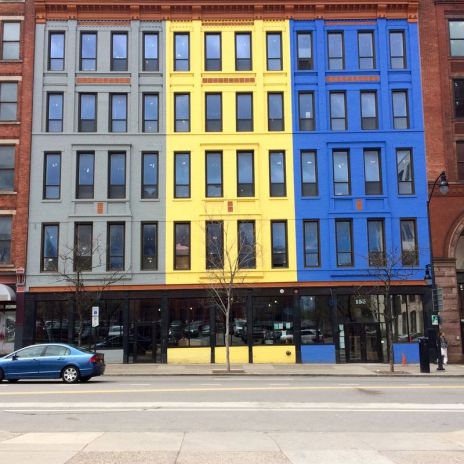